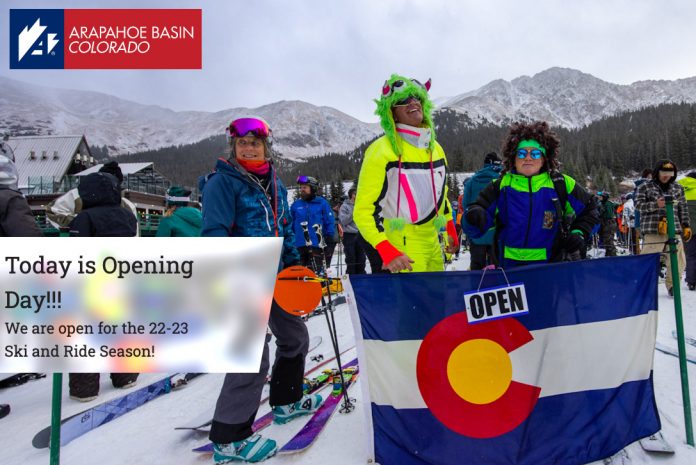 It’s here! The I70West ski season officially opens at A-Basin today with an 18 inch base.

People had lined up for days to be first on the lift. Four Summit locals, Nate “Nate Dogggg” Nadler, Tom “Trailer Tom” Miller, Anthony “Ant” Ugalde and Chad Otterstrom (He’s just “Chad”?), won the honors after camping out since Thursday. This marks at least the 20th year that Nate Dogggg and Trailer Tom have been on that first chair at A-Basin.

According to the Summit Daily, conditions were okay. “It was icy in parts, but High Noon also had a fair amount of soft and powdery snow and an 18-inch base. The biggest challenge for guests on opening day was giving other people enough space to make turns in order to avoid any major collisions.”

Look for uphill access and the terrain park to open later in the season. Meanwhile A-Basin will be open daily till, they hope, June 2023. Find ticket and other info at ArapahoeBasin.com.

There are no active watches, warnings or advisories

Traffic, weather and more. Info about the I-70 corridor between Denver and Glenwood Springs.

The Emmelyn, a state-of-the-art hut with energy efficient lighting...

Looking for some earlier-than-projected turns? Due to two...

Projected Opening Dates for I-70 Skiing